The project includes a trio of 168,000 above-ground jet fuel tanks, replacing the eight underground single-walled tanks. The new fuel system connects to the airport’s existing hydrant system, which delivers fuel to various airline gates. The project also includes a new operations building, which is equipped with digital and electronic systems to measure incoming and outgoing fuel. Now that the fueling facility is operating, the old underground tanks have been removed. 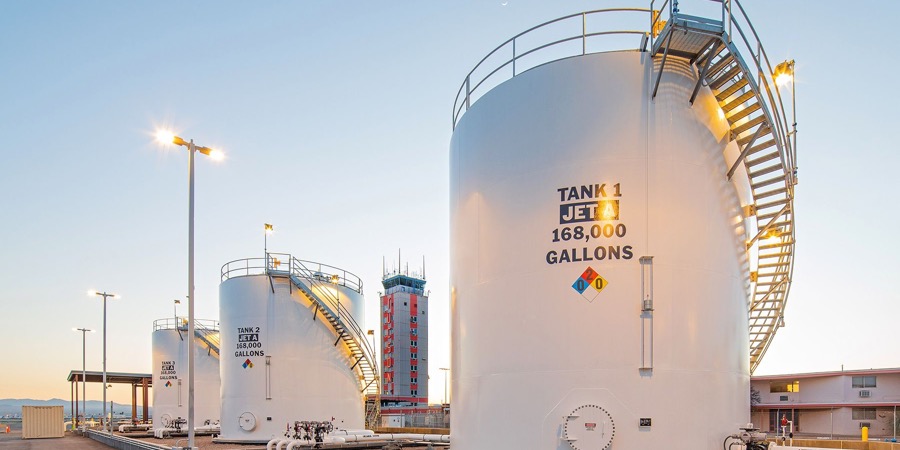 TUS leadership is enthusiastic about the new facility, its features and potential for growth. “With the new above-ground tanks, we have exceeded the former capacity and there is room to add another tank in the future, if demand warrants that,” said Danette Bewley, president and chief executive officer of the Tucson Airport Authority. “We also exceed all environmental regulations and have a sustainable and resilient facility for the future.”

Before the project began, Burns & McDonnell worked with the airlines and Tucson Fuel Facilities LLC to conduct a detailed analysis of the existing fuel station, which the firm had designed in the 1970s. After determining the scope and cost for retrofitting, the airlines opted to replace the facility to meet the airport’s future needs, and construction for the project broke ground in late 2020.

“Burns & McDonnell is proud to deliver this state-of-the-art fuel facility for the airport, TUS Fuel Facilities LLC and its airline partners,” said Dustin Giles, Burns & McDonnell project manager for the TUS fuel facility. “We were honoured to be trusted to provide insight into TUS’ future needs, and look forward to seeing the growth and success the airport achieves with these updated facilities and infrastructure.”