Owens Corning FOAMGLAS® Insulation said: “Ammonia is often stored at atmospheric pressure in cylindrical tanks at -33 °C (-27.4 °F). This creates a relentless vapour drive towards the tank wall that becomes highly subjective for condensation and moisture related issues if the correct insulation material is not used.”

Recently, the largest fertiliser company in Algeria, which is involved in the production, trading and development of ammonia-based fertilisers and its derivatives called upon the expertise of FOAMGLAS® insulation for the replacement of the insulation system on their ammonia tanks and piping. 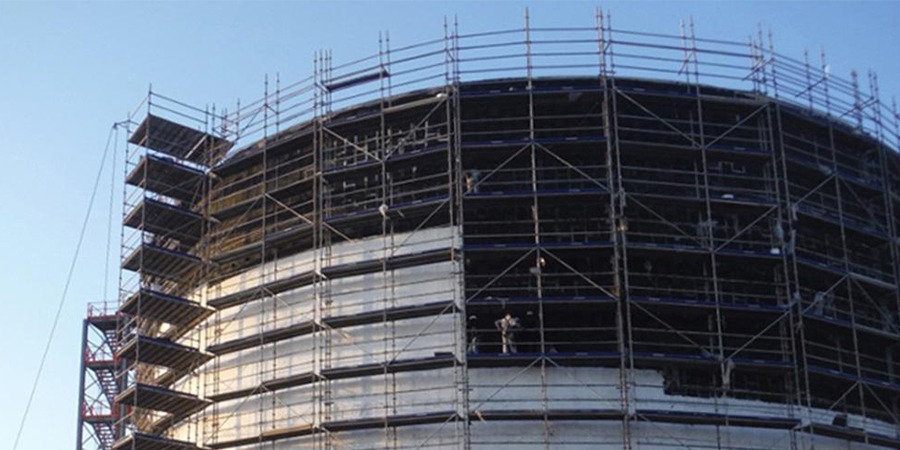 The ammonia storage tank at the fertiliser plant was originally insulated with a sprayed polyurethane system with metal cladding as mechanical protection.

But problems started to occur not long after the installation of this system. They discovered that they were suffering from some boil off issues as the boil off rate didn’t match with the calculation values.

Closer inspection showed that the main cause of the boil off problem was that moisture had concentrated into the polyurethane insulation system, which was negatively affecting the thermal performance – this  directly led to increased energy costs.

After some technical meetings, technical assistance and specification reformulations, it was decided to replace all the failing PUR insulation with a FOAMGLAS® ONE ™ cellular glass insulation system.

Liquid ammonia is stored at -33°C, outside temperatures in the North of Africa can easily climb up to 40 °C and more creating an environment with a relentless vapour drive towards the tank wall that is highly subjective for the formation of condensation if the correct insulation material is not used.

FOAMGLAS® insulation was the ideal insulation material for the job because it consists out of 100 percent closed glass cells which make it impermeable to any kind of moisture and vapour. It’s also completely incombustible and doesn’t produce any kind of smoke or toxic fumes in case of a fire.