As of Monday, May 13 total oil product stocks in Fujairah stood at 23.832 million barrels. Overall product stocks edged up by 0.5% with a modest build in residual stocks balanced by declines in light and middle distillates.

Stocks of light distillates fell by 2.9% week on week to 10.460 million barrels. Stocks are down by about 1.5 million barrels from the record high of 11.975 million barrels seen two weeks ago. Gasoline markets have steadied in recent days following sharp declines in cracks seen last week. “The gasoline market is currently very volatile. I am personally mixed (on the gasoline market) and am looking for any potential upside,” one market source said. The FOB Singapore 92 RON gasoline crack against front-month ICE Brent crude futures rebounded to $4.94/b on Monday from recent two-month lows but remained well below the average crack of $7.25/b for the month of April. 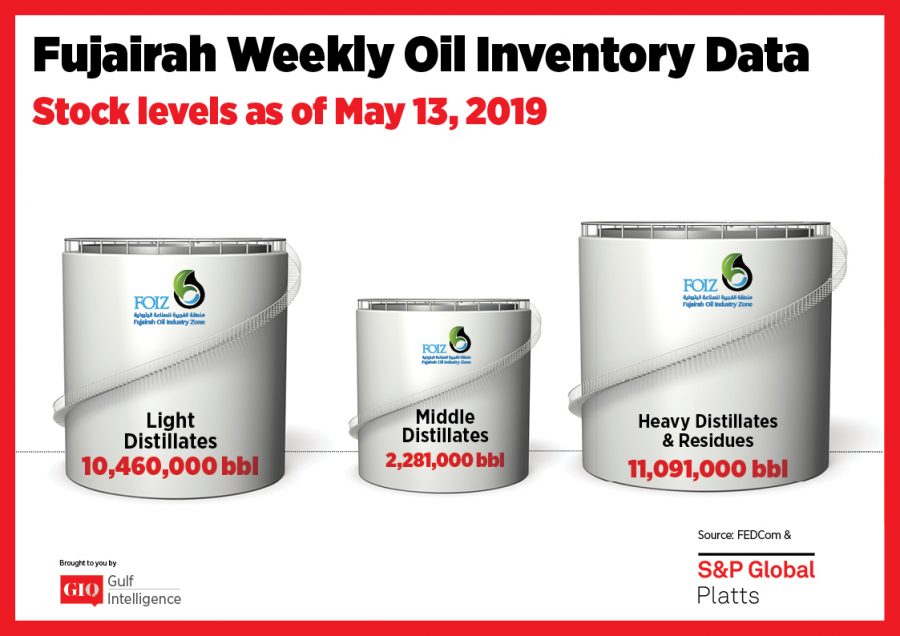 Stocks of middle distillates were reported at 2.281 million barrels, falling by 306,000 barrels week on week. Cross-regional flows of gasoil from the East of Suez to Europe are picking up. Although market sources reiterated that the arbitrage from Asia to the west of Suez was open on paper — with the front month EFS widening to minus $14.87/mt on Friday — a recovery in freight rates have dented economics. Freight for LR2 bringing clean products from the Persian Gulf to Northwest Europe increased to a two-month high of $30/mt recently. Meanwhile, freight for LR2 bringing clean products from the West Coast of India to NWE are also at two-month highs of between $24-25/mt.

Stocks of heavy distillates rose by 7.1%, adding by 731,000 barrels on the week to stand at 11.091 million barrels. Stocks remained well above average levels in 2018, which stood at 7.897 million barrels. Bunker activity in Fujairah was reported as stable in recent days, seeming unaffected by recent security incidents in the region. “It’s comparatively quieter today even with this fall in prices,” one bunker supplier said. Others noted steady buying interest as some buyers emerged on a weaker crude. Fujairah-delivered 380 CST bunker fuel was assessed at $409.25/mt on Tuesday. Prices dipped sharply following the release of bearish data that showed Singapore bunker sales down by 12% year on year in April.