As of Monday, March 4 total oil product stocks in Fujairah stood at 21.547 million barrels. Inventory levels fell 2.3% or 513,000 barrels week on week based mainly on a draw down in volumes of heavy residues. 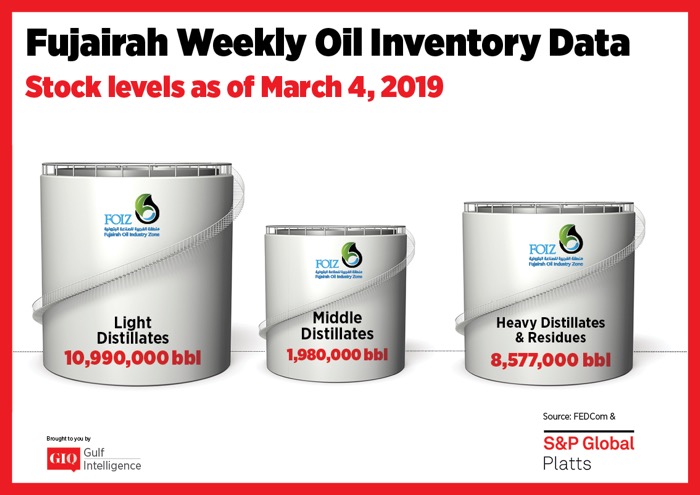 Despite the build in light distillate stocks the East of Suez gasoline market showed signs of strength with turnarounds across a number of North Asian refiners expected to lead to an impact on supplies in the region. “Sentiment is clearly better than the previous weeks,” a trader said. Closer to Fujairah, Kuwait’s KPC issued a tender seeking 25,000 mt of 91 RON gasoline for delivery into Mina Al-Ahmadi over March 27-28. The FOB Singapore 92 RON gasoline crack against front-month ICE Brent crude oil futures hit a four-month high on Monday of $2.41/b before moving up another 46 cents/b on Tuesday to hit $2.87/b.

Stocks of middle distillates showed a gain of 9.3% week on week moving to 1.980 million barrels. This reflects a build of 168,000 barrels week on week. Sentiment was seen as softening with cash differentials for gasoil falling for four consecutive days with the Mean of Platts Singapore cash differential for 10ppm cargoes moving into further negative territory Tuesday falling to 5 cents/b from Monday to a 27 cents/b discount.

Stocks of heavy residues saw the largest decrease this week moving down 12.4% to 8.877 million barrels falling 1.214 million barrels on the week. Within Fujairah traders reported a persistence of ample supply of bunkers, a feature of the market that has stood since the start of the year. As a result premiums for both delivered and ex-wharf bunkers fell in February. S&P Global Platts data shows that the spot delivered 380 CST bunker fuel premiums over MOPAG 180 CST averaged $11/mt last month, a fall of $6/mtfrom January.